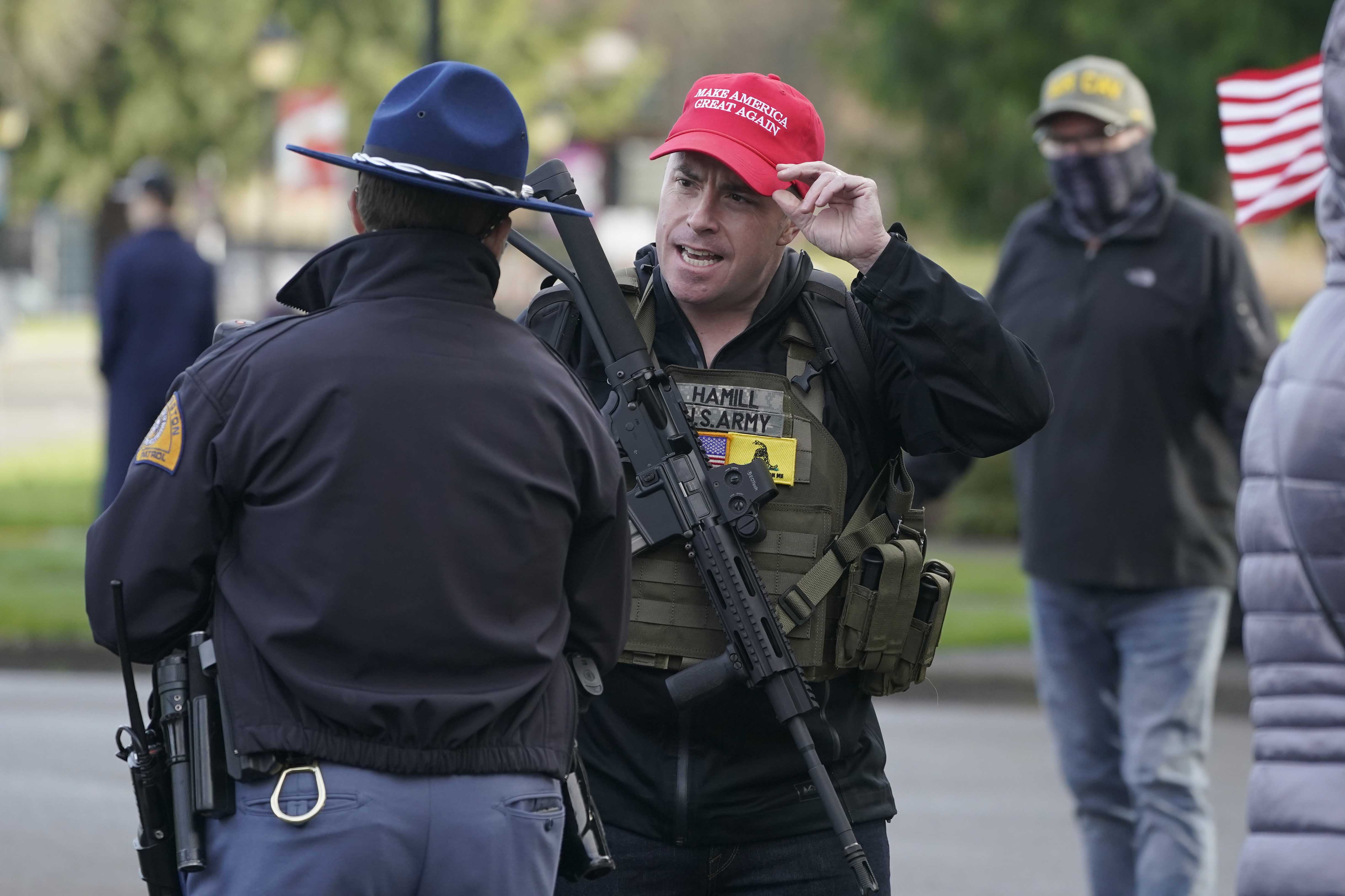 In another sign of the challenge, the Army on Monday announced it was ousting a junior officer who was investigated for posting a video to his 3 million TikTok followers joking about Jews being exterminated in Nazi concentration camps.

The recent events are coming less than a month after the actin Defense secretary directed a review of Pentagon policies meant to address hate groups in the military, which will include recommendations for punishing those who take part in extremist activity.

A 2020 survey found that more than one-third of all active-duty troops and more than half of minority service members reported witnessing first-hand examples of white nationalism or other ideologically-driven racism.

“To an even greater degree than in previous surges of extremism,” he added, “the Internet has played a role in the present one, with extremist content found on websites, discussion forums, chat rooms, social media, messaging apps, gaming and streaming sites, and other platforms.”

Pitcavage recounted a litany of incidents involving right-wing extremists in the ranks over the past few years, including: troops offering to teach how to make explosives and target left-wing activists, joining pro-Nazi organizations and traveling to Ukraine without orders to train with a right-wing militia. A Florida National Guardsman even founded a neo-Nazi group.

But the military’s record of detecting such elements is “haphazard” at best, Pitcavage told POLITICO.

“That almost all of the extremists in these examples were initially exposed by journalists or anti-racist activists is another troubling sign that the military branches may not be engaged in sufficient self-scrutiny,” he said.

A Pentagon spokesperson did not respond to a request for comment.

Crow, in a call over the weekend with Army Secretary Ryan McCarthy, requested the “expedited investigation and courts-martial against those involved” in last week’s riot. The military could also try former personnel in military courts.

The Congress member also said he asked McCarthy to direct the Army’s Criminal Investigation Division to review the backgrounds of all troops who will be deployed at Biden’s inauguration next week “to ensure that deployed members are not sympathetic to domestic terrorists,” his office said in a statement.

And on Monday, Sen. Tammy Duckworth, an Illinois Democrat and Iraq War veteran, also demanded the Pentagon investigate the allegations that troops and military retirees played a role in the storming of the U.S. Capitol by a pro-Trump mob.

Pitcavage said extremist infiltration of the military commonly comes in two forms: those with extreme ideologies who attempt to join the military, and military personnel who join or become sympathetic to an extremist movement.

He said in an interview he believes “the vast majority of them actually became extremist after they were in the military.”

A number of right-wing extremists groups, such as the Oath Keepers, expressly recruit members from the military, he notes.

Such elements constitute only a small percentage of the estimated 20 million Americans who have served in the armed forces. But extremists are seen as having far-reaching consequences for the military itself, including posing security threats, undermining morale and damaging recruitment and retention.

“The basic currency for the United States military is faith and confidence of the American people,” said Reed, who is now dean of the School of Public Affairs at the University of Colorado Colorado Springs. “When these incidents of racial and ethnic extremism take place, it goes directly to that question.”

The Pentagon says it is well aware it has a problem.

He also requested two separate reports: a set of recommendations on “initiatives to more effectively prohibit extremist or hate group activity,” which is due at the end of June, and one from the Pentagon’s General Counsel to propose any changes to the Uniform Code of Military Justice “to address extremist activity within the military,” which is due a month later.

“This is an empirical question,” Reed said. “How many extremist incidents occur, how many people identified, how many crimes committed? All those things are countable. The question to ask is, ‘are they being counted in such a way? And is that being tracked over time?'”

“These questions are answerable,” he added, “but when they get up in front of a congressional hearing those questions can’t be answered.”

He also noted that in nearly every instance in which extremists have been identified, the individuals exhibited warning signs.

“In every case that I’ve been aware of, there were plenty of signals that there were problems,” Reed said. “Those signals range from statements to tattoos and symbology and subscriptions to certain publications to internet activity.”

But there is no uniform or sustained process for tracking such behavior. “We don’t have an accurate grasp other than to say it is clear, it is growing,” Crow said. “That’s why we need the data.”

The potential role of current and former military personnel in last week’s riot is particularly alarming to those who have been raising concerns about the issue and hope the Pentagon leadership will finally take more aggressive action.

“It’s something commanders have to worry about all the time,” said former Marine Corps Commandant Gen. James Jones, who has recently warned about the rise of extremism in the military.

Jones, who also served as national security adviser under former President Barack Obama, said he plans to bring up his concerns about growing extremism in the military in a call on Tuesday with Marine Commandant Gen. David Berger.

“That is one of the questions I tend to ask,” he said on Monday. “In society, I have seen a rise. If it exists in society, it exists in the military.”

Of paramount importance, Pitcavage added, is “the military’s ability to detect people who are extremist trying to get into the military.”

But that might not be the biggest worry. “Some people are not extremists when they go into the military, but become extremists at some point while they are in the military,” he said.

Even if states keep troops mobilized on active duty — something many states say they are financially unable to do — that service time would not count toward federal benefits for the soldiers and airmen. “I will never tolerate any level of government trying to nickel-and-dime our soldiers,” Rose said following the Thursday announcement. “They […]

Navy upholds firing of carrier captain who warned of coronavirus

Crozier will not be eligible for future command, effectively ending his Navy career. “Both Adm. Baker and Capt. Crozier fell far short of what we expect from those in command,” Gilday told reporters while announcing the results of the investigation. “Had I known what I know today I would have not made that recommendation to […]

Colorado lawmaker going to bat for space industry in pandemic

Lamborn also spoke to POLITICO about his new efforts to bring more space operations to Colorado and to help space companies weather the pandemic, including protecting their supply chains from disruptions. “I’ve hired someone in my office … full-time on staff just to help with defense companies because there’s so much going on,” he said. […]