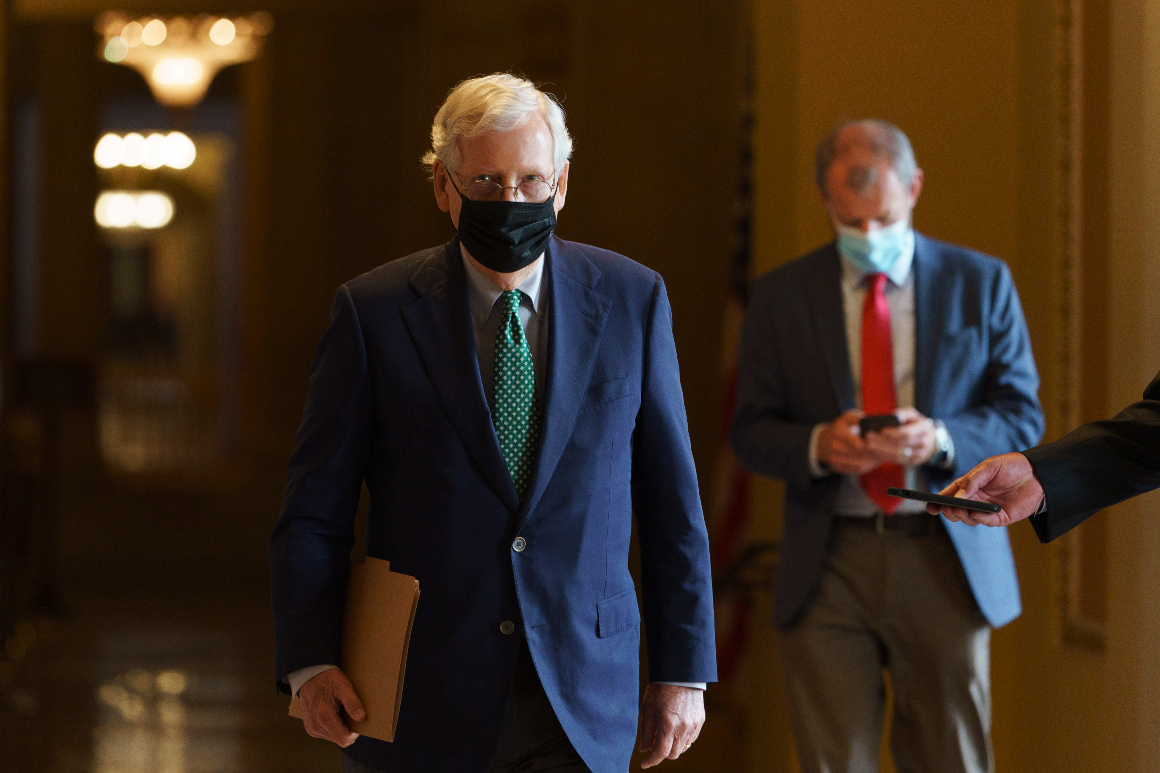 It marked the beginning of a mobilization effort designed to harness the grassroots fury ignited by the GOP’s response to Ginsburg’s death — an opening flurry of activity that Democrats hope will fuel their takeover of the White House and Senate in November’s election.

“This illustrates forcefully that justice is on the ballot in each of those races for U.S. Senate,” said John Walsh, 2020 campaign manager for Sen. Ed Markey (D-Mass.). “We need to succeed, and fulfilling Justice Ginsburg’s wish will be a motivation for millions of people to vote and talk with their friends about the election.”

In the past few years, Democrats have grown increasingly concerned about the composition of the Supreme Court, an issue that’s long been the province of Republican voters. But the battle over the confirmation of Justice Brett Kavanaugh, along with McConnell’s refusal to hold a vote on President Barack Obama’s nominee, Merrick Garland, in 2016, helped to change that.

A recent poll by the Pew Research Center found that 66 percent of Joe Biden supporters said Supreme Court appointments were very important to their vote in the presidential election, compared with 61 percent of Trump backers — a reversal from 2016, when Trump fans saw them as more critical.

Liberal groups are looking to use that energy to ramp up pressure against Republican senators to break with McConnell, particularly those who are in competitive races or who have said in the past that they would not confirm a nominee before Inauguration Day. Most see GOP Sens. Lisa Murkowski of Alaska, Cory Gardner of Colorado and Mitt Romney of Utah as being the most promising after Sen. Susan Collins of Maine, who said Saturday that the appointment to the Supreme Court should be made by the president who is elected on Nov. 3.

Demand Justice is launching a $10 million ad campaign in an effort to stop Republicans from filling Ginsburg’s seat before the presidential inauguration in January. Women’s March is planning big protests. Indivisible has mobilized its members to call Republicans’ offices in the Senate and demand that they “refuse to hold any hearings or confirm any new justices until the next term begins,” according to a prepared script.

The group also said it already has campaign infrastructure in place seeking to oust 12 Senate Republicans, which was originally created in response to the Senate’s impeachment acquittal of Trump, that it plans to utilize in the weeks ahead.

“If the Senate Republicans continue to follow McConnell on this,” said Indivisible press secretary Emily Phelps, “they’re going to be the target of the wrath of millions of grieving, pissed-off, motivated volunteers from all 50 states.”

Democratic activists are particularly incensed by the fact that McConnell and other GOP senators argued in 2016 that, rather than vote on Garland, Americans should be able to weigh in on the next Supreme Court nominee in the upcoming presidential election. In key battleground states, local left-wing organizations are also looking to push Republicans, such as Pennsylvania Sen. Pat Toomey, to hold off on confirming a new justice by turning their own words on them.

“Our plans around mobilization are still in formation, but we do intend to remind Sen. Toomey that he blocked the confirmation of Merrick Garland on the grounds that in an election year, ‘it makes sense to give the American people a more direct say in this critical decision,’” said Hannah Laurison, executive director of the progressive group Pennsylvania Stands Up.

But Democrats face a formidable challenge in trying to pick off Republicans, even those in tight races. Sen. Lindsey Graham (R-S.C.), who is tied with Democratic opponent Jaime Harrison according to a recent poll, has already signaled that he supports Trump nominating a justice, despite the fact that in 2016 he said the Senate shouldn’t fill vacancies in a presidential election year.

The pressure campaigns aren’t limited to Republicans. In a year in which progressives ousted a handful of incumbent House Democrats, a former aide to Sen. Bernie Sanders (I-Vt.) called for a Democrat to immediately announce that they will launch a 2022 primary challenge against Minority Leader Chuck Schumer. The goal: Make him grind the Senate to a halt in hopes of somehow staving off a confirmation.

“Schumer needs to face maximum pressure every single day to use all possible power that his caucus has — and it has power — to stop a Trump appointment,” wrote David Sirota, Sanders’ speechwriter for his 2020 presidential campaign, and progressive activist Andrew Perez in a newsletter. “Not just pressure as in phone calls and protests — pressure as in you-will-be-voted-out-of-office pressure.”

Along with contacting Republicans, Indivisible members are also calling Senate Democrats’ offices to urge them to slow down the business of the Senate in hopes of blocking a future nominee.

Demand Progress, a left-wing group, said 50,000 people have sent emails to Democratic and Republican senators around the country asking them to “block every motion, force every bill to be read in full, and use a wide range of parliamentary tactics to shut down the Senate between now and January, when new Senators and the president are inaugurated.”

Democrats are largely powerless to stop the nomination if Republicans have 50 votes: They can try to put on the brakes, but judicial confirmations run on a separate calendar and McConnell controls the floor. Progressive activists and former Senate aides insist they have leverage to drag it out, though.

“All options have to be on the table,” said Sen. Brian Schatz (D-Hawaii), referring to efforts to block the confirmation. But asked for details, he declined to elaborate.

In the wake of Ginsburg’s death, left-wing groups are also working to boost support for the campaign to pack the Supreme Court by expanding the number of justices. Once a fringe idea, the cause picked up steam in the Democratic presidential primary when several candidates said they were open to it. Biden, who has opposed the proposal, is likely to face increased pressure from liberals to change course.

Already, some Democrats are expressing support for adding seats to the court.

Rep. Jerry Nadler, chair of the House Judiciary Committee, tweeted that if Republicans “were to force through a nominee during the lame duck session — before a new Senate and President can take office — then the incoming Senate should immediately move to expand the Supreme Court.”

Meanwhile, in a call with Senate Democrats Saturday, Schumer said, “nothing is off the table for next year” if Republicans move forward with their plan.

“Court expansion is on the map in a way that it’s never been before,” said Aaron Belkin, director of Take Back the Court, a group leading the charge for court-packing. “Part of that is because [McConnell] stole the court in 2016, and the fact he’s now pledging to violate the ‘rule’ he used to steal the court in the first place is, of course, electrifying the opposition and underscoring the need to rebalance the court so this doesn’t happen again.”

Given the obstacles they face in trying to stop McConnell, however, progressives had not effectively prepared for this moment, said a person involved with one liberal group opposing the confirmation.

“There’s no clear strategy,” the individual said. “It’s another one of these moments where if we were the other side, we would have had much more of a plan in place.”

But many Democrats said the upcoming Supreme Court battle is making their voters even more motivated than they were before, which could pay dividends in November.

“Enthusiasm is through the roof,” Schatz said. “Nothing motivates voters like righteous anger.”

Laura Barrón-López contributed to this report.

Sen. John Barrasso (R-Wyo.) said that giving into Pelosi on anything seen as expansion of Obamacare in the next recovery bill will be seen as “an enormous betrayal by our supporters,” according to people familiar with the call. The pushback from Senate Republicans shows just how difficult it will be to assemble a spending bill […]

Here is how those protections are supposed to work: 1) The Congressional Oversight Commission Who’s in charge Congress’ main oversight tool is a new, five-member panel that is charged with monitoring a $500 billion fund for distressed industries operated by Mnuchin, in partnership with the Federal Reserve. The four top congressional leaders each get an […]

A feud over face masks and pandemic relief: Congress returns

GOP Rep. Richard Hudson took a different tack. He simply never went back to North Carolina after Congress adjourned on March 27, remaining in D.C. with his family instead. “I’ve been here, never left,” Hudson said. “I’ve been in the office every day and working.” Once they did get to the Hill on Thursday, most […]