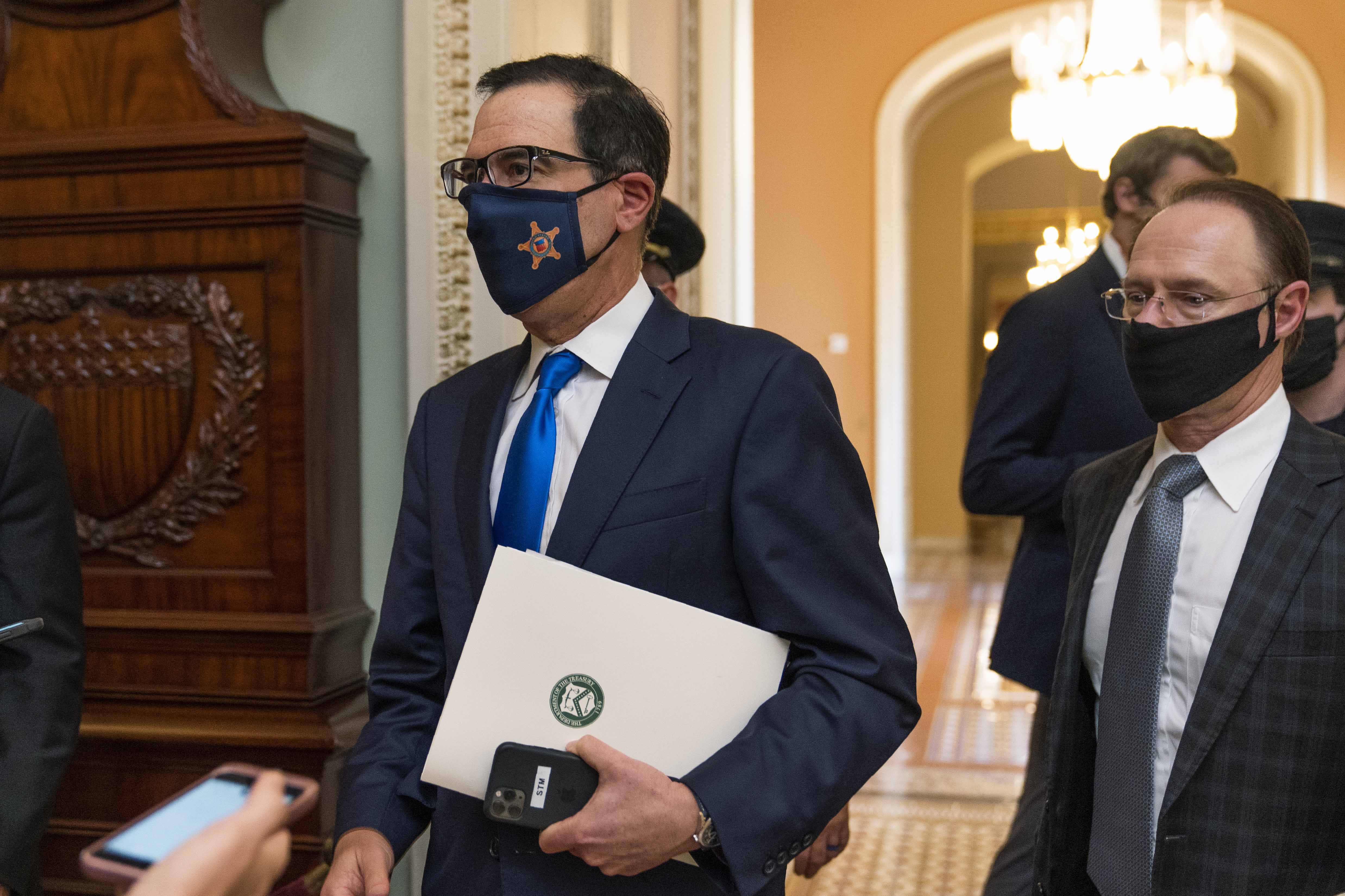 Mnuchin said Wednesday that he and Pelosi continue to “make progress.” Pelosi’s spokesperson, too, described the talks as “productive” and said the two negotiators would speak again on Thursday.

But across Washington, a dose of political realism has begun to set in, with lawmakers and top aides begrudgingly admitting that it would be virtually impossible to clinch a trillion-dollar-plus package in the next 20 days.

Even if a deal could be struck, it would take days to prep the bill, call lawmakers back to Washington and assemble the votes. And that’s only if Senate Republicans are willing to take up the potential legislation at all.

Senate Republicans, meanwhile, have sought to pressure some Democrats in their chamber into voting for a much more pared-back version of the aid package.

Senate Majority Leader Mitch McConnell has teed up a vote on a GOP aid bill next week, which would offer more money for unemployment insurance and provide funding for schools and hospitals, in addition to Paycheck Protection Program funding for small businesses.

That bill, though exact details aren’t clear yet, is expected to be far below what Democrats have demanded to help shore up the coronavirus-battered economy.

For months, Pelosi and Mnuchin have engaged in talks despite clear differences that some critics have described as possibly irreconcilable. Still, neither party is willing to pull out completely, even as it has become increasingly clear that Senate Republicans — a crucial group in the negotiations — would likely balk at the size of any potential compromise.

Both Mnuchin and Pelosi have said they’ve made strides in recent weeks of negotiating, even after those talks were temporarily halted by President Donald Trump himself. Trump changed course hours later, under pressure from some GOP members.

But the negotiations remain stuck on several major disparities in funding — such as cash for state and local governments — and in policy.

“One major area of disagreement continues to be that the White House lacks an understanding of the need for a national strategic testing plan,” Pelosi spokesperson Drew Hammill said Wednesday after the latest phone call.

Mnuchin, meanwhile, told the Milken Institute virtual audience on Wednesday that he disagreed with what he described as Pelosi’s “all or nothing” approach.

Negotiations on Congress’s next coronavirus package have dragged on since May, when Democrats passed a $3.4 trillion bill that they saw as their opening bid to Republicans.

Months later, with no legislation passed in the Senate, House Democrats passed a trimmed-down version of that initial bill with much of the same programs but over a shorter timeframe. The second draft, with a price tag of $2.2 trillion, was intended to help restart negotiations, which had since stalled.

Talks did restart, with Pelosi and Mnuchin speaking by phone on a nearly daily basis for much of October. Mnuchin offered a $1.8 trillion deal last week, but Pelosi and other top Democrats have rejected it.

Biden’s longtime economic adviser Jared Bernstein said on Wednesday that if there is not a deal before Election Day, a Biden administration stimulus would need to be passed quickly and be focused on urgent programs, such as unemployment benefits, nutritional support, state and local support, along with evictions and foreclosure protections.

“Will the gap between where the economy is and where it should be still be of considerable size in Q1 of next year? The answer to that is an unequivocal yes,” Bernstein told the virtual audience at the Milken Institute Global Conference.

Bernstein was joined by Jason Furman, the former chairman of the White House Council of Economic Advisers during the Obama administration and a Biden booster who has also been floated for a senior economic role should Biden win the White House.

Furman also emphasized the need for speed in getting a stimulus on Biden’s desk after Jan. 20.

“I think the trick is one you need to act really quickly because unless that bill comes together now, we will have this huge air pocket that’s developed in the economy,” he said.

Alex Thompson and Victoria Guida contributed to this report.

The infighting has intensified so rapidly that Rubio even suggested this week that his committee’s annual hearing on global threats might not go on as planned, citing “heavy politicization.” The hearing allows members of the House and Senate intelligence panels to hear directly from the heads of the CIA, National Security Agency and other agencies […]

The boycott won’t prevent Barrett’s nomination from moving ahead, with Republicans on the committee vowing to confirm her. Sen. Lindsey Graham (R-S.C), chairman of the Judiciary panel, chastised Democrats for their move and said Barrett will receive a vote. “That is a choice they are making,” Graham said. “I believe it does a disservice to […]

“We need to figure out what’s going on,” added Rep. Barbara Lee (D-Calif.), one of the nation’s most prominent anti-war Democrats, when asked about plans for a war powers vote this week. “I think everyone expected some unfortunate retaliation,” Lee said of Tuesday’s Iranian attacks. “It’s a spiral now, that unfortunately might get out of […]