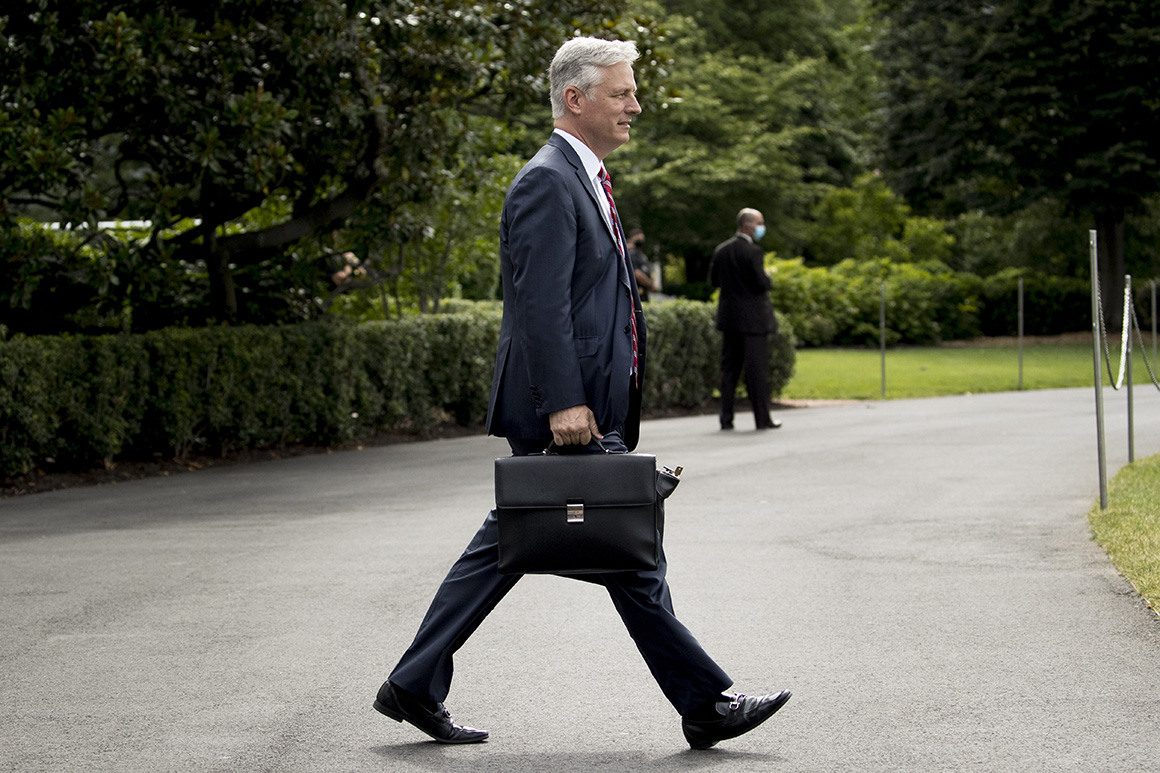 “It’s not my practice to speculate,” O’Brien said. “Other people can interpret that what I say is a speculation, but I wasn’t speculating. … When I’m speaking, I’m speaking for the president and I think that’s what the Pentagon is moving out and doing.”

The remarks were the latest in an unusually public back-and-forth between two senior advisers to the president on the issue.

Differing timelines: Top military leaders have been generally unified on the contours of withdrawal from Afghanistan, saying they want to bring the troop level from 8,600 to roughly 4,500 by next month and be completely gone by May 2021 if the conditions of a February 2020 agreement between the U.S. and the Taliban are met.

On Oct. 7, O’Brien went a step further during a speech in Nevada, saying the troop level should be reduced further to 2,500 by early next year. Hours later, Trump appeared to undercut his own national security adviser by tweeting that troops “should” be home by this Christmas. Trump sent the tweet 90 minutes before the start of the vice presidential debate, and it followed the president’s repeated campaign pledge to bring troops home.

Milley then fired back this week, saying the plan is to “do a responsible, deliberate drawdown to about 4,500 here very shortly” and that further troop reductions must be based on security conditions in the country.

“The key here is that we’re trying to end a war responsibly, deliberately, and to do it on terms that guarantee the safety of the U.S. vital national security interests that are at stake in Afghanistan,” Milley said.

On Friday, O’Brien acknowledged that the timeline could accelerate in order to match the president’s tweet, but it’s not likely.

“There’d be nothing greater than to have our troops home by Christmas,” O’Brien said. “But right now we’re on a path with our European allies … that looks like about 4,500 this fall and a small number in January and February, but if the conditions permit it, we’d love to get people out earlier.”

What’s next: Many conditions must be met for troops to leave Afghanistan under the U.S.-Taliban agreement, including ending attacks on American forces and in Afghan cities while severing all ties with al-Qaeda. Negotiations between the Afghan government and the Taliban — another condition in the agreement — are ongoing.

‘Embarrassing and disgraceful’: Trump’s push to withdraw thousands of troops ahead of the election has made lawmakers from both parties dyspeptic about weakening U.S. leverage in the Afghan peace process. Rep. Jason Crow (D-Colo.), who has pushed to constrain a drawdown, slammed the Trump administration on Friday over its varied messages on Afghanistan.

“This is embarrassing and disgraceful for the country. We have the world looking at us,” Crow, a member of the House Armed Services Committee and former Army Ranger, said in an interview. “It is very clear this administration has no plan. They have no coordination and they’re not even managing their national security staff appropriately because there’s different things being said by different people over the course of a week.”

Crow said the mixed signals on Afghanistan bolster his case for a provision in the House-passed defense policy bill that would limit Trump’s drawdown. Crow — along with Reps. Liz Cheney (R-Wyo.), Michael Waltz (R-Fla.) and Susan Davis (D-Calif.) — sponsored a proposal that would bar troop reductions below certain levels unless the Pentagon certifies doing so won’t put U.S. troops at risk, hurt counterterrorism efforts or risk expanding havens for terrorists.

The GOP-led Senate didn’t adopt its own limitations and the provision will be on the negotiating table when the House and Senate Armed Services leaders craft a compromise National Defense Authorization Act after the election.

Crow added that he’s pushed for both a public Armed Services hearing and classified briefing on Afghanistan during the lame-duck session.

House lawmakers have separately sought to block Trump’s plans to remove thousands of troops from Germany, a move both parties criticized in recent weeks for its lack of detail and for the potential to weaken NATO and embolden Russia.

“As we do in all crises, the Community’s experts respond by surging resources and producing critical intelligence on issues vital to U.S. national security,” the statement reads. “The IC will continue to rigorously examine emerging information and intelligence to determine whether the outbreak began through contact with infected animals or if it was the result […]

“We were able to get our legislation into the NDAA in the next manager’s amendment,” the Virginia Democrat revealed Tuesday during a USTelecom event. Trump administration support helped secure this development, according to Warner. Larry Kudlow, who heads the National Economic Council, has spent months talking about the merits of 5G virtualization technology. U.S. policymakers […]

McCarthy also said he ordered D.C. Guardsmen to not carry weapons on Monday when it became clear there were enough federal law enforcement defending the city. Defense Secretary Mark Esper. | Alex Brandon/AP Photo McCarthy detailed the chain of events that took place this week, noting that the decision on Monday to put active-duty troops […]