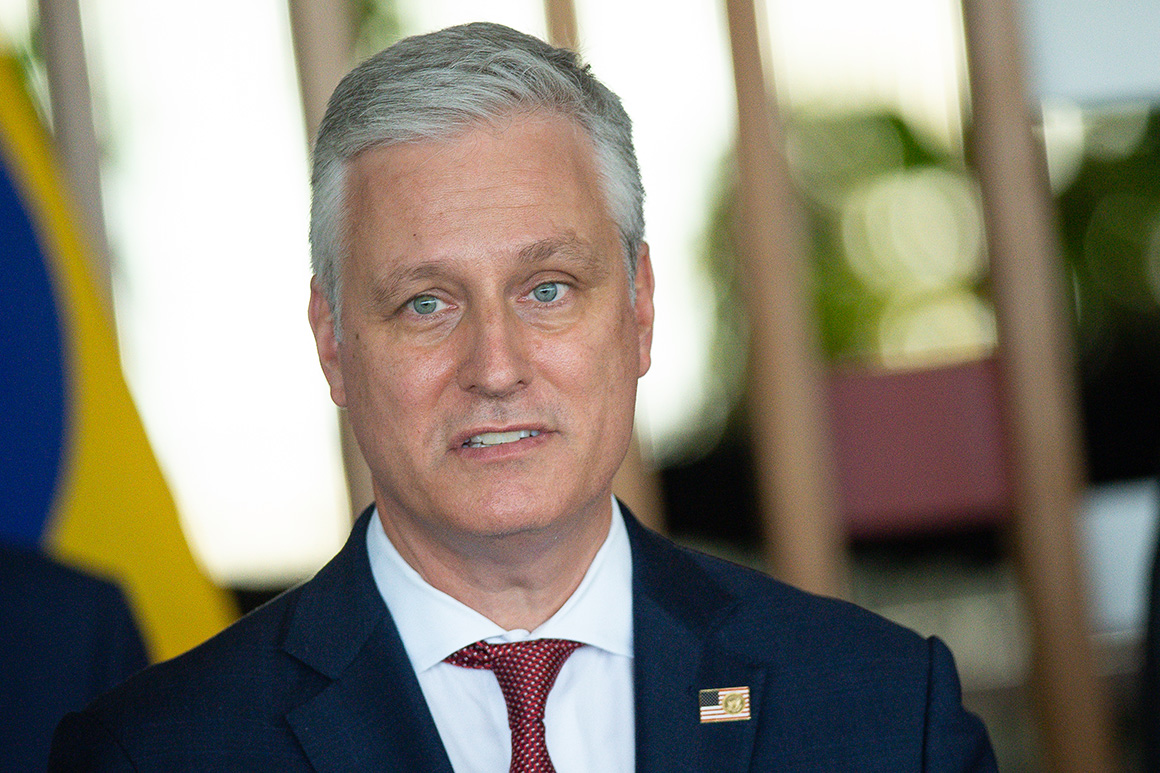 Trump has mentioned the missiles at rallies as he ticks off accomplishments on military spending, incorrectly referring to them as “hydrosonic” weapons.

“We have hydrosonic missiles that go seven times faster than a normal missile,” Trump told a crowd in Arizona on Monday. “We have the best hydrosonic in the world.”

O’Brien gave the speech during this election season visit to New Hampshire and Maine on Wednesday, where he underlined the importance of expanding the size of the Navy, one of Trump’s key campaign pledges.

O’Brien has made building up the Navy a priority of his tenure as national security adviser, while shrinking the rest of the National Security Council, a group that drew fire from Trump after its role in his impeachment. O’Brien, who was a potential Navy secretary if Mitt Romney had been elected president in 2012, sees naval issues as crucial to America’s competition with China and Russia.

While on the trip, O’Brien did several local radio interviews previewing his visit to the Portsmouth shipyard and General Dynamics’ Bath Iron Works.

In his speech on Wednesday morning, he also recognized senators from New Hampshire and Maine, including Susan Collins, who’s facing a tough reelection challenge. O’Brien praised her and other senators for working “tirelessly to protect and support these shipyards, whether it be fighting sequestration or securing millions in appropriations dollars for military construction for Portsmouth.”

O’Brien said previous methods of investing in new ship classes and weapons systems “led to insufficient investment for the systems necessary to maintain peace and deterrence today.” He also touched on how lightly manned and unmanned vessels that use artificial intelligence are likely to play a role in helping supplement big ships and submarines that the Navy is famous for.

The fleet has 296 ships now, and Defense Secretary Mark Esper recently announced plans to expand it past 500 by 2045.

“The pursuit of these new systems, however, cannot be allowed to cause a ‘trough’ in force structure, whereby the nation endures reduced capability while we wait for future technologies and new ships to come online. Any such plan that trades current capability for future ‘out year’ promises is not acceptable to the president.”

Along with some other senior staffers, O’Brien was accompanied by Lucien Niemeyer, a top national security official for the Office of Management and Budget, and Mark Vandroff, the NSC’s senior director for defense policy and strategy, who was the head of the destroyer shipbuilding program in the Navy before retiring.

New Hampshire is not the only swing state O’Brien is going to visit before the election; he’s due to visit Wisconsin as well, home to the Marinette Marine shipyard. He’s also expected to make at least one foreign trip related to the president’s priorities in the next two weeks, according to a senior administration official.

Late Tuesday night, O’Brien returned from a three-day trip to Brazil, where he met with Brazilian President Jair Bolsonaro, who endorsed Trump during a news conference and said he wanted to attend Trump’s second inauguration as a fellow populist.

But Defense Department officials acknowledged separately that they will be on the lookout for opportunistic activities by adversaries, either on the ground, in cyberspace or in the form of information warfare. “There is always the possibility that adversaries will seek to exploit the information space and talk propaganda,” said one defense official. “We are definitely […]

“The department’s commitment to closely partnering with the defense industry remains unwavering, and we will continue to identify and mitigate impacts from the COVID-19 national emergency to ensure readiness and modernization,” Andrews said. Santos announced tearfully during a Thursday morning staff call that she had been fired and would leave her post at 5 p.m. […]

“At this point it’s just direction from the WH on what they want to do,” the official said. The flyover and previously announced fireworks at Mount Rushmore will kick off this year’s Independence Day celebrations across the country, but the main event will be a “Salute to America” on the National Mall on July 4 […]