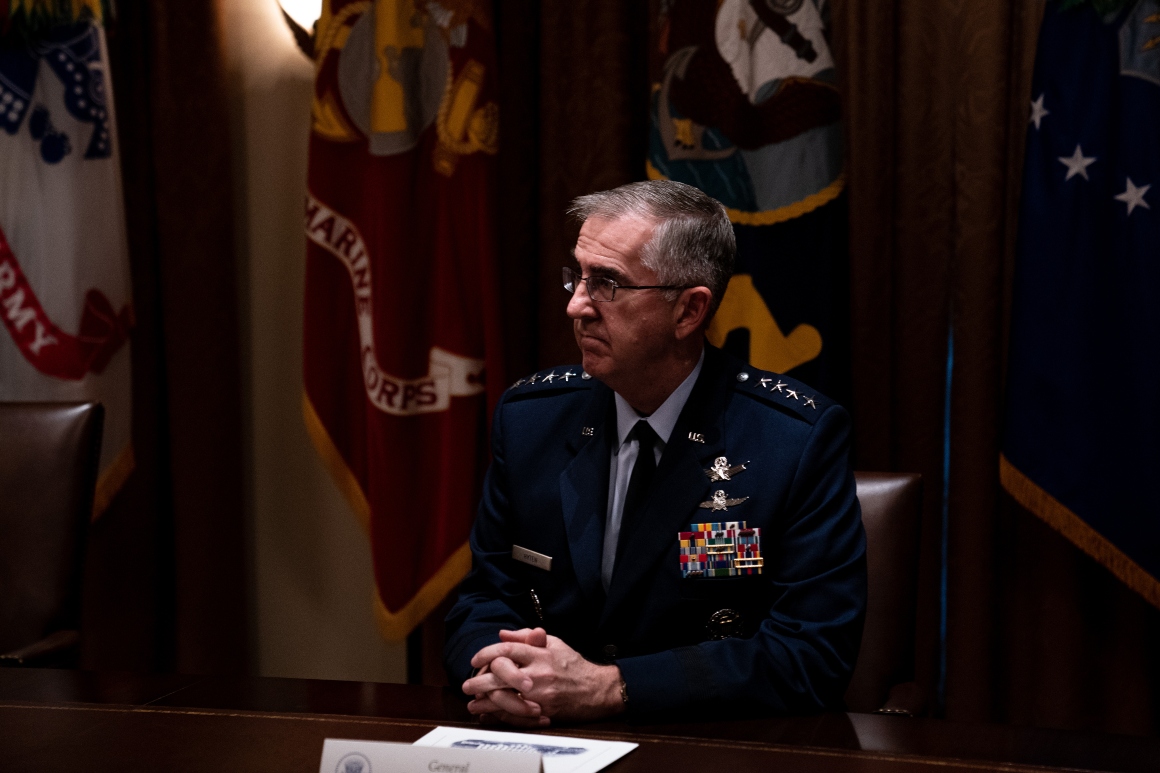 The judge denied the motion on Thursday, arguing that the alleged assault could not “conceivably serve any military purpose.”

“Regardless of whether General Hyten came to Plaintiff’s hotel room under the pretense of work-related purposes, it is not conceivable that his military duties would require him to sexually assault Plaintiff, or that such an assault would advance any conceivable military objective,” according to the ruling.

The Air Force can appeal, but the ruling means that the case can proceed for now. A spokesperson for Hyten could not immediately be reached for comment.

Spletstoser’s lawsuit says that in December 2017, Hyten, who was then her boss at U.S. Strategic Command, came to her hotel room while they were attending the Reagan National Defense Forum in Simi Valley, Calif. Once inside, the lawsuit states, he grabbed her and rubbed against her, ejaculating in his shorts. Spletstoser alleges that he later retaliated against her for rejecting his advances.

When Trump nominated Hyten for the job of the nation’s No. 2 military officer in 2019, Spletstoser filed a complaint that prompted an Air Force investigation. The complaint was a major issue during Hyten’s confirmation hearing last year, but Hyten received strong backing from senators on both sides of the aisle and was eventually confirmed.

Even Sen. Martha McSally (R-Ariz), a retired Air Force pilot who revealed last year that she was raped by a superior officer, came to Hyten’s defense.

“The truth is that General Hyten is innocent of these charges,” McSally said. “Sexual assault happens in the military. It just didn’t happen in this case.”

Two former U.S. officials told POLITICO that Lindsey Graham (R-S.C.) has been urging the White House directly to leave a small presence, made up of U.S. special operations forces and potentially CIA paramilitary officers, on the ground to maintain pressure on the Taliban and continue counterterrorism operations against al Qaeda and the Islamic State. Those […]

Joint Chiefs Chairman Gen. Mark Milley said the attack, which also killed a coalition member and wounded 14 others, was carried out by “Shia militia groups.” He did not name the group responsible but said “we have pretty good confidence we know who did this.” Earlier on Thursday, Central Command chief Gen. Frank McKenzie told […]

The White House declined to comment publicly on the funding disparity and referred POLITICO to the Defense Department, which did not respond to multiple requests for comment. The states in question also did not offer an explanation as to why their costs alone will be fully covered. A senior administration official, responding to POLITICO’S queries […]