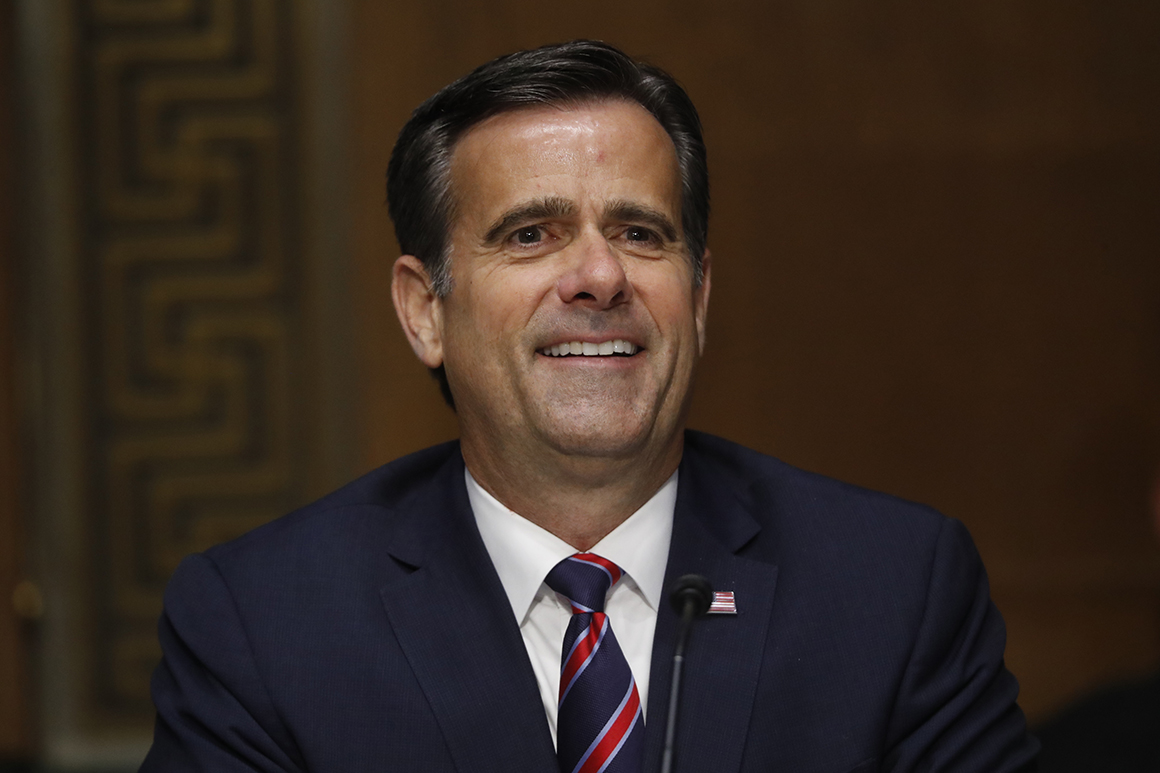 “This is a shocking abdication of its lawful responsibility to keep the Congress currently informed, and a betrayal of the public’s right to know how foreign powers are trying to subvert our democracy,” Schiff and Pelosi said.

ODNI decided to scale back the briefings because classified material from recent briefings leaked out, according to a U.S. intelligence official and a congressional official in touch with the office. CNN first reported the development.

ODNI officials were particularly angry about a leak from an all-House classified briefing led by top counterintelligence official Bill Evanina late last month, where Pelosi accused him of keeping Americans in the dark about the details of Russia’s continued interference in the 2020 campaign.

Evanina ultimately acknowledged in that briefing that Russia is again trying to boost President Donald Trump’s reelection and denigrate his opponent, Joe Biden. In a statement at the time, an ODNI official said Evanina was “incredibly disappointed in the inability of some to protect classified information they are legally obligated to safeguard and instead attempt to use it for partisan gain.”

During a roundtable in Orange, Texas, on Saturday, Trump blamed House Democrats for leaking information.

White House chief of staff Mark Meadows added, “[Ratcliffe’s] going to make sure that there’s proper tools for their oversight and make sure they contain it in a way that does not jeopardize sources and methods for the intel that we’ve got.”

On the more recent moratorium on verbal briefings, an ODNI official provided this statement to POLITICO: “We are committed to meeting our statutory responsibilities and keeping Congress fully and currently informed. For clarity and to protect sensitive intelligence from unauthorized disclosures, we will primarily do that through written finished intelligence products. We are concerned about unauthorized disclosures of sensitive information following recent briefings. The DNI is committed to ensuring Congress is fully and currently informed and that classified information is protected.”

Ratcliffe hinted at friction in prior election security briefings.

“In order to ensure clarity and consistency across the Office of the Director of National Intelligence’s (ODNI’s) engagements with Congress on elections, the ODNI will primarily meet its obligation to keep Congress fully and currently informed leading into the Presidential election through written finished intelligence products,” he continued.

Ratcliffe also hinted at prior unauthorized disclosures of classified material.

“I believe this approach helps ensure, to the maximum extent possible, that the information ODNI provides the Congress in support of your oversight responsibilities on elections security, foreign malign influence, and election interference is not misunderstood nor politicized,” he wrote. “It will also better protect our sources and methods and most sensitive intelligence from additional unauthorized disclosures or misuse.”

In response to their requests that he brief the full House and Senate on election threats, Wray wrote a letter to Sens. Chuck Schumer and Mark Warner and Reps. Pelosi and Adam Schiff on August 21 indicating that while he shared their concerns, the member briefings were being led capably by top counterintelligence official Bill Evanina along with select FBI personnel and other national security officials, according to two people who have seen the letter.

He also mentioned the FBI’s Protected Voices program, an initiative begun in 2018 that aims to help political campaigns and individuals protect themselves against foreign influence operations and cybersecurity threats. ODNI has not clarified if Evanina will give in-person briefings on election security to all members of Congress in the future.

Kyle Cheney contributed to this report.

An official with the Office of the Director of National Intelligence said Evanina, in his statement last week, was “quite clear that the Intelligence Community will continue to update the American public and other key stakeholders on threats to the election and steps for mitigation.” “Unlike some, we don’t comment on the content of classified […]

Abercrombie, a former longtime House member, said his decision comes from his experience as an ex-special election candidate and a gubernatorial candidate who himself resigned from Congress. “Trying to do my job in Washington and run for office, another office, in Hawaii was just too difficult. I couldn’t do it,” he recalled. “I had hoped […]

The letter, addressed to Secretary of State Mike Pompeo, also said that annexation “would actively harm prospects for a future in which all Israelis and Palestinians can live with full equality, human rights and dignity, and would lay the groundwork for Israel becoming an apartheid state, as your predecessor John Kerry warned in 2014.” AIPAC […]