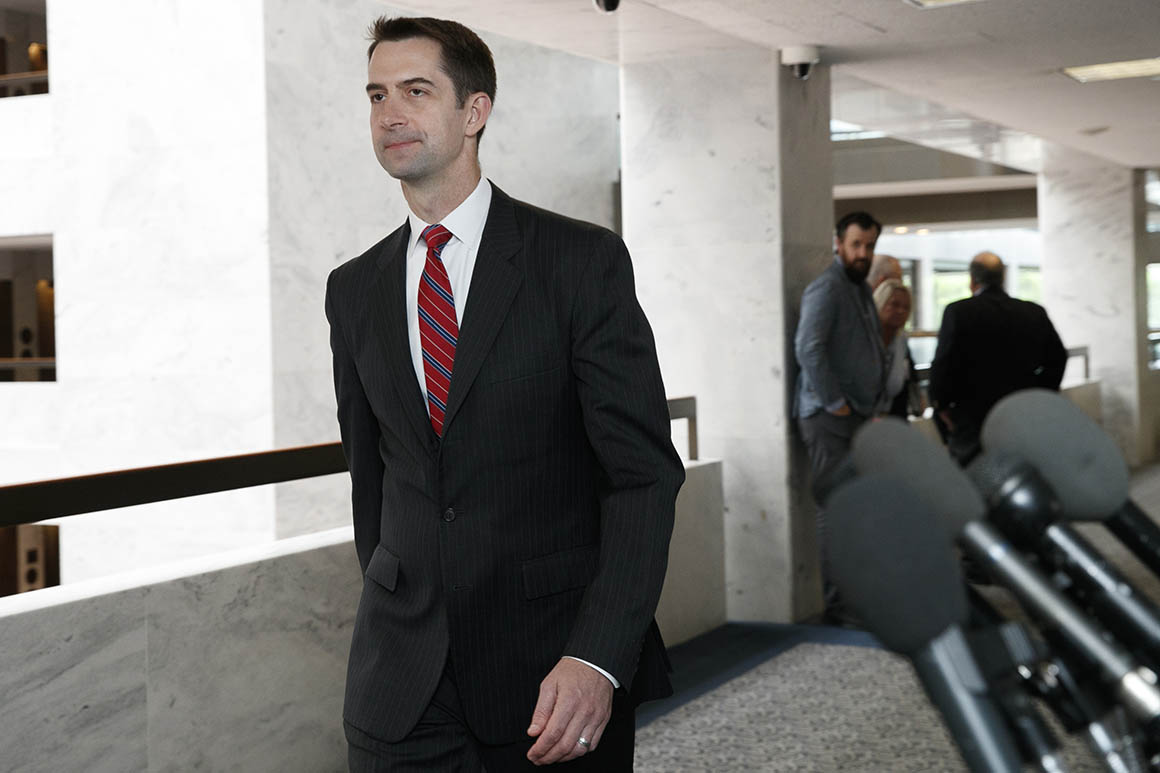 The column highlighted incidents of looting, rioting and shooting in American cities as part of the unrest sweeping the nation following the killing of George Floyd, a 46-year-old black man, while in police custody in Minneapolis. The Republican senator urged President Donald Trump to “support local law enforcement with federal authority” by invoking the Insurrection Act.

Addressing the backlash on Fox News on Thursday morning, Cotton said the reaction to the op-ed revealed what he said was the hypocrisy of progressives that claim to defend liberal values.

“As soon as they are presented with an opinion with which they disagree, they go into meltdown, they demand censorship, they refer to words as violence,” Cotton said.

The Times’ editorial page editor James Bennet defended the decision to publish Cotton’s piece, writing on Twitter that it was the newspaper’s role to show readers opposing viewpoints from elected officials.

“We understand that many readers find Senator Cotton’s argument painful, even dangerous,” Bennet wrote. “We believe that is one reason it requires public scrutiny and debate.”

The NewsGuild of New York said the op-ed lacked context and vetting, while claiming Cotton spread misinformation that “pours gasoline on the fire.”

Prominent Times journalists tweeted their opposition to the decision to publish the article.

“As a black woman, as a journalist, as an American, I am deeply ashamed that we ran this,” wrote Nikole Hannah-Jones, a New York Times Magazine writer who spearheaded the “1619 Project.”

The op-ed contained arguments that previous Times reporting had flagged as misinformation.

Cotton wrote that “left-wing radicals like antifa” were exploiting the Floyd protests to promote anarchy. But the Times had reported that the claim that antifa activists were the cause of looting and riots was the largest incidence of misinformation surrounding the protests.

While Loeffler has defended her actions and said the trades were done by third-party advisers, she announced Wednesday in a Wall Street Journal op-ed that she would liquidate all of her individual stock holdings. Loeffler emphasized she made the move not because of any wrongdoing but to quiet any distractions. “My family’s investment accounts are […]

To be certain, the freshmen share many positions with Waters. “Auntie Maxine,” as she is affectionately known by her supporters, has used her committee gavel to refocus the panel’s agenda on protecting consumers and expanding opportunities for minorities. Waters, a Los Angeles Democrat, has summoned powerful Wall Street executives to testify at hearings, giving her […]

Both Engel and Senate Foreign Relations Committee Chairman Jim Risch (R-Idaho) plan to hold hearings to review the agreement, although neither has scheduled any session at this point. Since the agreement is not a formal treaty, Trump does not have to submit it to Congress for approval. “We knew the Taliban is not a nice […]